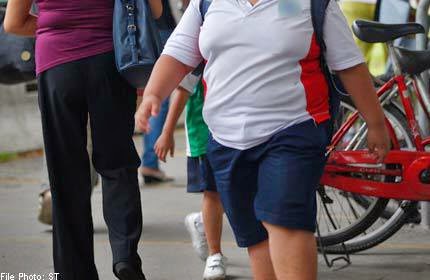 SINGAPORE - Get ready to trim the fat - the Health Promotion Board (HPB) wants Singaporeans to lose one million kilograms in total by 2016.
According to a tender document posted on a government website, the HPB will launch a "One Million Kg Challenge" as part of its annual National Healthy Lifestyle campaign later this year.

The latest National Health Survey in 2010 found that one in 10 Singaporean adults, or 10.8 per cent, was obese, up from 6.9 per cent in 2004.
Even children here have been packing on the weight, with one in 10 pre-schoolers now seriously overweight.

A person is obese when his body mass index (BMI) is 30 or higher.
To calculate BMI, divide your weight in kilograms by the square of your height in metres.

Poor food choices as well as more Singaporeans having jobs where they sit most of the day were blamed for the bloat.
As part of the new campaign, the HPB wants Singaporeans to get up and moving, and also care more about what goes on their plates.

A spokesman said the agency will encourage companies, organisations and individuals to support the campaign over the next few months but did not give more details.

According to the document, the HPB hopes to kick-start the programme by recruiting 75,000 people here who will be motivated to lose 3kg each on average over six months.
Some of these will be drawn from the agency's corporate partners, health institutions and schools, business parks and Singapore Health Award recipients.

Communities and constituencies will be roped in from the second year.

But while everyone should exercise, overweight people may have medical problems that make it necessary for their exercise to be tailored, said Dr Ben Tan, chief of sports medicine at Changi General Hospital.

He recommended minimal impact activities such as swimming, cycling, elliptical trainers, rowing machines, and brisk walking to get them on their feet.
Singapore's ageing population is also a concern. "In general, the elderly are prone to falls... Hence, fall prevention should be a consideration in any exercise programme for them," he added.

Dr Tan said a rule of thumb for ramping up physical activities should be 10 per cent a week. "For example, if you walk 100 minutes this week, try 110 minutes next week."
Nutritionist Liza Rowan, who owns consultancy Health and Vitality, recommended using chicken stock or water instead of oil for stir-frying dishes at home.

For elderly people who may desire sharper-tasting food because their taste buds are weaker, herbs and spices such as ginger, dried garlic, lemongrass and paprika are healthy ingredients.

"Prepare crunchy vegetables as snacks at home and keep the unhealthy potato chips in hard-to-reach places. Then when you need a snack it'll be easier for you to be healthy," she said.

sumber: yourhealth.asiaone.com/content/aim-singaporeans-lose-1000000kg-2016
Posted by Rully Bhaskara at 7:19 AM